From the series on Killer Apps: Email Archiving

Last week I had mentioned Rightfax as one of the common resource killers that we often see in larger Domino environments. Today, I want to show you another common killer application: email archiving. While I was writing this post, I seriously think I should dedicate a series of articles on what we internally refer to as Killer Apps. (Hence the title.)

During a recent assignment we noticed patterns in end user demand that showed a strong deviation from what we normally see. For us this usually is a reason to dive in a little deeper, to see what's going on. Let me show -and explain- you what we reported to our customer.

The case involves a government organization in the UK of almost 15,000 Lotus Notes users. Plotting the server load caused by end users over time (expressed in database Transactions per Minute - TPM), showed a pattern as follows: 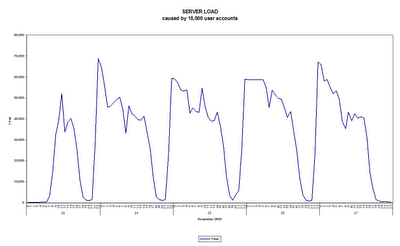 If this is the first time you are looking at an analysis result like this, I can imagine that you do not notice anything strange at first hand. We see 5 working days (and each of the 7,220 minutes) in a week of November 2009, with load levels expressed vertically.

Watch what happens if we split the levels into two categories: one caused by 'normal' user accounts and the other caused by -what we refer to as- a heavy user account: 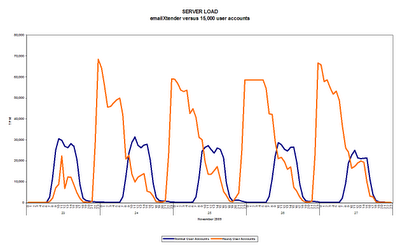 The blue line represents a typical load pattern one might expect from normal end user behavior. Almost 15,000 people who are coming into the office at 8-9am. have lunch at about 12 and go back home for dinner (or other activities) at about 17-18pm. Notice how the purple line shows demand levels that exceed those caused by the 15,000 end users by more than 150%. The purple line is in fact a single user account that carries the name emailxtender, which -according to their website- has been renamed into EMC SourceOne.

Interesting enough, a deeper dive into this SourceOne solution on the EMC website gave me access to their 'Benefits Calculator'. I could not resist registering and trying out their Benefits Calculator with the statistics we have for our customer. I'll spare you the details (shown in their report here), except for the fact that it claims to save this organization "$2,871,400 in total saving over the next three years".

I cannot match these claimed savings, with the massive amount of server resources that this emailXtender functionality is consuming at our customer environment. My customer would benefit more from switching it off, completely. Or contact EMC support...
op 12:07 AM